Per Federal Orders, face coverings are required at U.S. airports 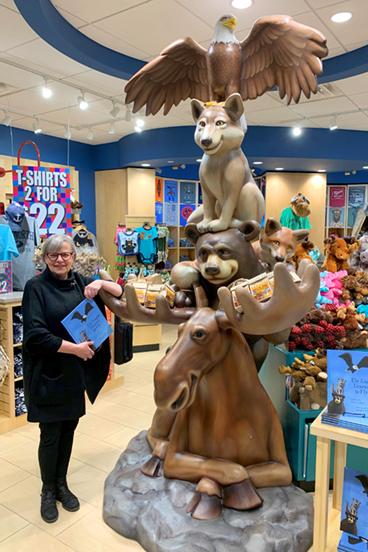 "I woke up in the middle of the night and had this story about how all these animals ended up stacked on top of one another," said Debra. "First thing in the morning, after waking up, I jotted down a story outline and emailed it to everyone on the team, and they all said, 'We should make that into a book.'"

Three years later, "Ely Eagle Learns to Fly" debuted and is now featured front and center at all three stores at MSP. (For those not traveling through MSP, the book can be purchased online and at Irreverent Bookworm in Minneapolis and Winding Trail Books in St. Paul.)

It's a charming picture book that describes how the topmost animal, Ely the Eagle – with the help of her forest friends (all named for Minnesota cities) – embarks on her first flight to visit her grandmother. But themes in the book about friendship – and having the courage to fly – also include an autobiographical thread.

The book is dedicated to Debra's sons – Michael, 28, and Hogan, 25 – for whom she is "so proud of how you fly!" And to Carole Howe, the creative force and founder of CBR Partners, which owns the Minnesota State of Nice store along with Delaware North.

The animal sculpture was Carole's idea and she encouraged Debra to bring the story to life as well as mentoring her to become a partner, along with CBR Partners and Delaware North, in the two bookstores.

"It's been my lifelong dream to own a bookstore and here I am a partner in two," said Debra, who is a collector of children's books and an avid Harry Potter fan.

While the Internet has posed challenges for traditional independent bookstores, bookstores at airports – where people on layover often have time to browse and shop – are doing well.

Learn more about the many shops and restaurants at MSP Airport.